While in Paris last September (2018), I attended an exhibition of Caravaggio’s works, “Caravaggio in Rome: friends and enemies”, shown at the Jacquemart-Andre Museum in Paris.  Among the pieces were two tableaux depicting the biblical story of Judith decapitating the Assyrian general Holofernes.  One of the works was by Caravaggio and the other by Orazio Gentileschi.  Later this spring articles appeared in the major newspapers about a long-lost “Judith and Holofernes” painting which had been rediscovered in 2014 in the attic of a private home in Toulouse, France.  Subsequently, the painting was acquired by a mystery buyer at an auction reportedly for a figure in excess of $100 million, notwithstanding a bevy of doubting experts. 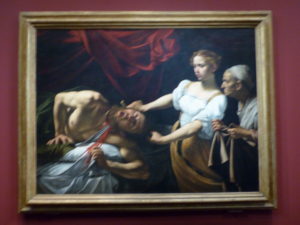 Early Works of Mondrian on Display in Paris through January 2020